Our Journey to the Inauguration

Each year in AP Government and Politics, my overriding goal is to make the class as applicable to the lives of the students as possible.  This year presented us with many opportunities to take in government as we journeyed through this election cycle.

It all started in October with a visit from incumbent State Assemblywoman Donna Lupardo (@donnalupardo).  Each year when we get to the section of curriculum regarding initiative and referendum she comes in to talk about the practical implications of those two democratic features in government and on our lives.   She additionally spoke about the impact of Citizens United on her campaigning as well as the role of interest groups in an election cycle.  The students were able to ask her questions and she was able to answer our questions in a way that furthered our knowledge or statewide politics, bipartisan work in the state legislature, caucus's within the state legislature and fundraising during a campaign.  We are very thankful for her visit to our class. 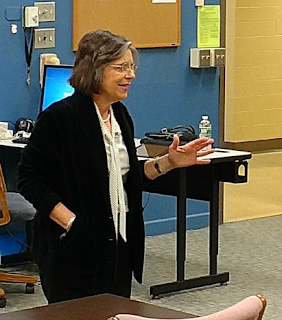 Next up was Election Day.  In class, we grouped up to breakout the key of the White House in several different BreakoutEDU (combination of paper and digital) that a couple students and I constructed.  All groups broke out just in the nick of time!


The BreakoutEDU was designed so that the students had to use the concepts we have been learning about in class in real life context to work through the clues.

That night, we had a gathering to watch the election results in my classroom.

The conversations that night reflected my student's curiosity, knowledge of the electoral system and the media.  They were keeping track of which states their candidate needed to win in order to capture the elusive 270 votes needed.  It was fascinating to sit back and watch them experience this night together as they saw what we had been learning about unfold in front of them. Most of the students knew who their candidate was and as results came in, there were cheers and disappointment going back and forth as we watched the race to 270 tighten up.

In early December, we were blessed with a visit from our incumbent State Senator, Fred Akshar (@fredakshar).  His visit was about a month after the election and he was able to share his knowledge of what it was like to campaign again so soon after winning the special election that put him in office the year prior.  He spoke of how financing influences campaign decisions, what life if like in the public eye and how things function on a day to day basis both in Albany and while he is home in his district.   We are very appreciative of his time with us. 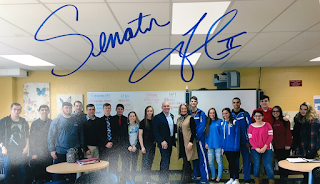 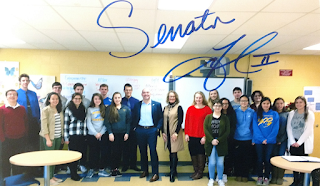 In December, we were given a once in a life time opportunity to watch the Electors in NY cast their ballots. We traveled to Albany on December 19th and after a tour of the capitol building we were seated in the gallery to watch the proceedings.  Adding to the excitement, former President, William J. Clinton is an Elector for NY.  The process was fascinating and so were the questions from the students.  It was clear that they were not only curious about the process and people in the room (Governor Cuomo, LT. Governor Hocul, Mayor DeBlasio, etc.) but also about the implications of faithless electors (had there been any).  I am not going to lie, I was geeking out about being in the same room with a former President but also about getting to watch this process. 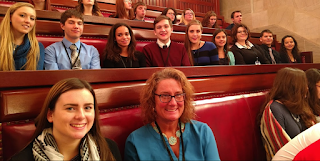 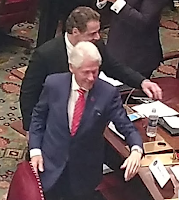 That brings us to the inauguration!  We left school on Thursday morning around 4:30AM and arrived at Union Station around 11.  We divided up by chaperone and went our separate ways.  We were able to see the National Museum of American History, the outside of the Capitol building, the Washington Monument, the WWII Memorial, the reflecting pool and the outside of the White House.  Unfortunately, everything past the end of the reflecting pool was closed due to the pre-inauguration ceremony.

Posted by Rachel Murat at 1:02 PM No comments:

We Have Become Digital Leaders

Throughout #DigCit this semester, we have been working to prove that we are digital leaders.  All of this was based on a sketchnote by @gcouros, @sylviaduckworth and @jcasatodd. 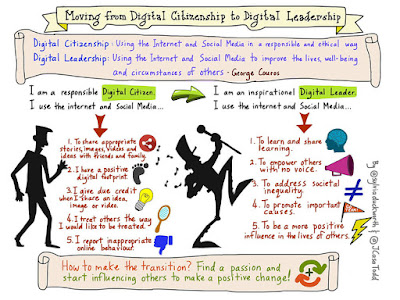 If you will notice, there are 5 criteria on the right side that denote digital leadership.

1. To learn and share learning.
2. To empower other with no voice.
3. To address societal inequality.
4. To promote important causes.
5. To be a more positive influence in the lives of others.

Those 5 criteria were our driving force this entire semester.  I have blogged a couple times regarding our activities this semester and you can access them here:

Discovering What our Digital Tattoo Is
Do YOU Have a Social Brand?
App Smackdown, Periscope and #DigCit
Students Tackle Haters and Trolls in #DigCit

We first visited the project rubric in September so that we could keep the end in mind. Here is the rubric: 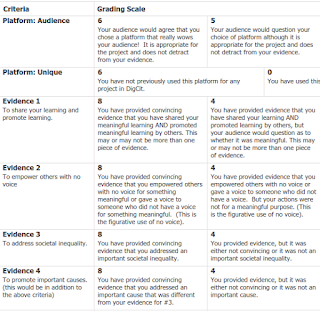 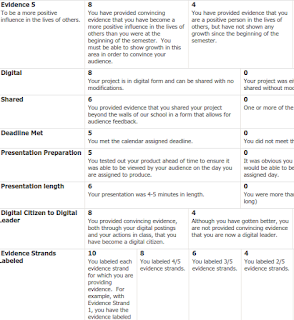 One of the things that is a priority for me is providing an authentic audience for my student's work.  This semester, I added in Periscope so that we had a live audience during the event in addition to the asynchronous audience we would have through my blog and pictures tweeted out.  I wanted to make sure that we had an authentic audience for this project, but I also wanted to make sure that the students had the opportunity to invite people who were meaningful in their lives to witness the evidence they have of their transformation to a digital leader.  Each student was asked to invite two people.  Some chose parents, some chose friends, some chose teachers and some chose administrators.  I invited all of the people the students asked to visit as well as our Superintendent (@vanfossenjason) and a couple other administrators throughout the district.  Each day we had between 6-10 judges in our room.  We also were blessed with a virtual Periscope audience that was anywhere between 3 and 60 people!

The judges (both in person and virtual), which included the students in the class, were given a Google Form to vote during each presentation.  Here is the Google Form.  If you clicked on the link, you noticed that it gave an opportunity for the audience members to give shout outs to the presenters in addition to evaluating the criteria of the projects.  I think this part of the feedback process is important for the students to grow in confidence and grow in their digital leadership.  I created a Google Doc for each student that had all of the data from the Google Form evaluations and the shout outs so that they could do a blog reflection after our project.  One thing I forgot to do on this form was to ask the audience if the students had mastered the platform they chose.  The students had to choose a different platform each time they did a project and the students in the audience would vote if they felt that student presenting had earned a Techspert badge for that platform.  You can see and example here: Techspert Badge.

Here is an example of the Google Doc given to the student for data and shout outs after their presentation.
Here are two examples of the blog reflection: Stephanie and Rachel
You can see the Periscope broadcasts by searching Mrs Murat under people in Periscope.  They are all titled DigCit Leadership Projects.

I would love your feedback on the project, class or student's work.