In #digcit class this week, we concluded our unit on digital literacy by engaging in an app . It is housed in Google Slides and can be viewed here.  They signed up via a Google Doc and had to use an app/extension that was not used for our app/extension reviews.

They chose apps/extensions that even I learned from, which is a pretty big feat since I have over 250 apps and extensions!!  This year not only did we have our classmates, we also had two teachers, our building assistant principal, a former board member and parent as well as an Assistant Superintendent and our Superintendent in as guest judges! Here is the Google Form that everyone used as the feedback form. We are working on presenting in front of a broader audience so that when we do our final presentations in January, the large audience that includes all of the above plus community members and parents, we are rock star presenters!

Our winner (chosen by her peers and guest judges) was Mia (Twitter)!

We hope you learn from our app smackdown!  Which one did you like the best?

Here is the rubric that guided them in their creation of the end product.  They gave me feedback as to what they should be responsible for and this was the end product: 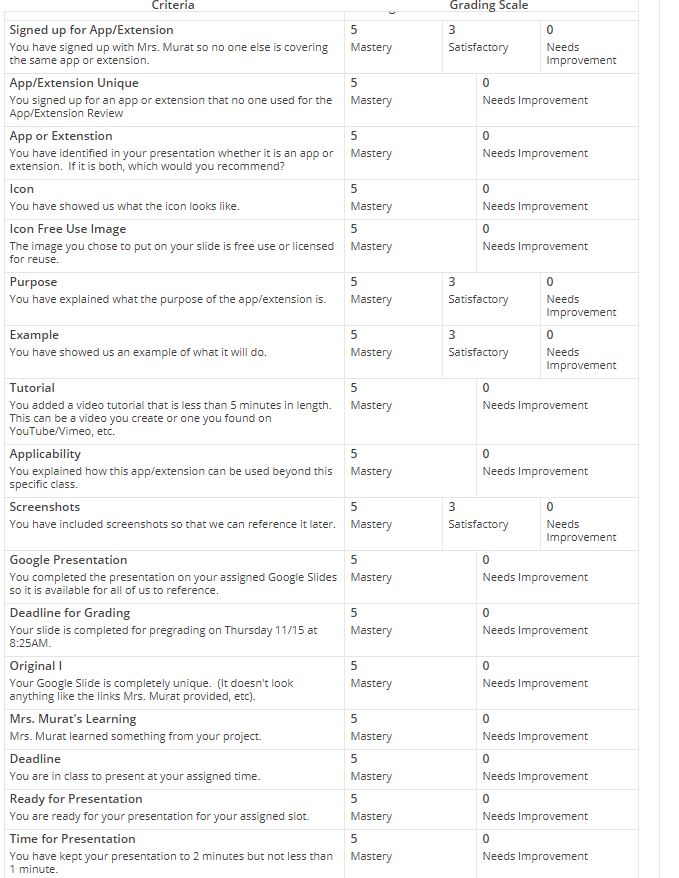 
As part of our media literacy unit in our #DigCit class, we wanted to tackle app/extension reviews for several reasons.  (The rubric is below)

They had to tweet them out (I tweeted for those who do not have social media).  Many were very excited to have the company/person that created the app/extension retweet their blog posts!

We would love your feedback if you have a couple minutes!