My #DigCit students have been studying their digital footprint/tattoo and are now working on educating others as to what social branding is and how they can help build a positive social brand for themselves in the process.  They could choose any platform off this list: https://goo.gl/VgH9eL or propose a different one to me.  Here are some of their projects.  If you would leave some comments that I could pass on to the students, it would be greatly appreciated.  Thank you and enjoy!

Apps and Extensions I Use Daily

I have a little bit of a Chrome extension problem (ok, it's a pretty big problem) but there are so many that save me time or enable my students or to do something we couldn't previously do that they are a necessity in my digital life. 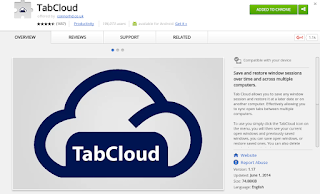 Tab Cloud enables you to store a series of tabs and once you are signed into Chrome, you click on it and choose your series of saved tabs and boom! They are open.  I use this every single day.  In the morning, I use the same 14 tabs and opening each one every morning took me about 15 minutes between typing in the web address and waiting for each to load that finding this extension was huge for me.  My students use it and it saves so much time at the beginning of each class period! 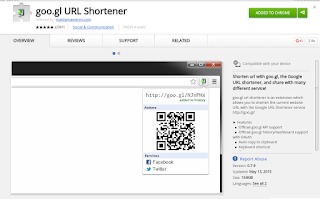 Goo URL Shortener
This seems self explanatory, but it's uses go beyond saving time for students or teachers typing in a URL to join what you are doing.  It also automatically creates a QR code with analytics attached to it.  This means that you do not have to go to a separate website to create the QR code.  You can see how many people have used it to access whatever it is connected to and what type of device they are using. 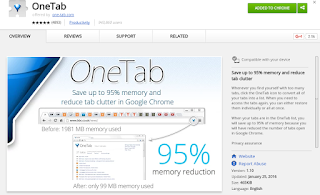 One Tab is one of my favorite extensions (which is saying a lot) because I seem to find a new use for it at least once a week.  I use it most often at conferences to share out my learning and enable anyone looking at it (and me) to review all of the resources I discovered at the conference.  Here is an example: http://goo.gl/bK3sFU from #EdCampCNJ this past weekend.  As you can see, I had a lot of tabs open, but this way I always have an archive of them to review at later times.  I also use it a lot when curating resources for my students.  Here is an example: http://goo.gl/SP4RKf. I don't always give them the resources because there is merit in encouraging them to find and evaluate resources, but sometimes I need to save time in the search process.  Another reason I use it is to send people resources.  For example, we were searching for a new sound system for my classroom and instead of sending 15 links to my principal I One Tabbed those links and then sent him the one link.  That way, it saved him time and I knew he was on the right page for each website. 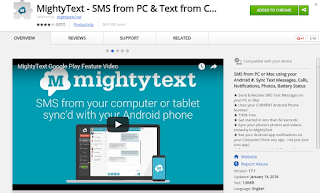 Mighty Text not only saves me time because I can type a text message faster, but it also allows me to get my notifications where there isn't any cell service.  I typically have to go to our BOCES for meetings and inside the building there is no cell service.  I leave my phone in the car, where there is service, and I am able to get and respond to my notifications in real time.  Both a time saver and it allows me to deal with any problems that occur with no delay. 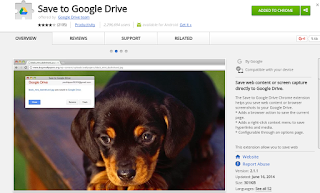 Save to Google Drive allows me to curate resources during Twitter chats or if I am surfing the web with only a few clicks instead of copying and pasting, which doesn't always work.  I can then search my Drive later to find the resource, where if I had simply saved the link as a bookmark, I might not remember what it was on the page that I needed. 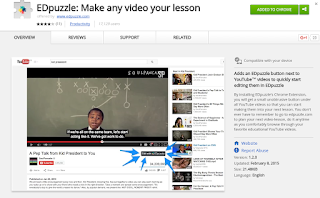 allows you to take a YouTube video and crop it and then add in open ended questions, multiple choice questions, comments or voice overs and then gives you both a link to share out to anyone or an embed code to put in your LMS.  This not only saves me time, but it also allows me to create a video of the material I would have covered had I been there on a day when I am out.  This ensures that the learning continues even in my absence.  It also gives me data on the back end so I can use it as a formative assessment. 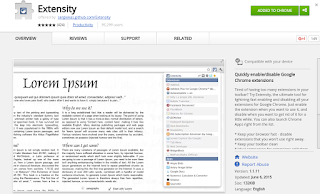 saves me time when looking for extensions when I need them because it organizes them alphabetically.  It also allows me to turn them on and off as I need them.  This means that I can have as many as I want, and still have a URL window to use!

There are many more apps and extensions I use and they can be found here: https://goo.gl/vjBOfz.

I don't know about you, but I don't often hear two 17 year olds arguing about President Hoover in terms of both his place in history and the parallels with the Obama Administration.   This is exactly what happened in my class today.  Let me frame it for you.

I hadn't been enthralled with the way that I was teaching US History.  Yes, the kids were compliant.  Yes, they would discuss in class. Yes, they were doing well on the formative and summative assessments.  Yes, they said they liked the class.  But my heart just wasn't in it.  I don't think I let it show in class, but I wasn't sure for how long I could keep up the charade.

I recently went to an Inquiry Based Design session with @MrsOlbrys at Windsor High School.  It was like a weight had been lifted off my shoulder and the sun was once again shining.  I knew that this is what I had been seeking as an alternative to what I had been doing in US History.

For those of you that know me, you know that I jump into things with both feet when I see something that will not only transform the way that my students learn but will afford them student voice opportunities.  This is the task that I gave the kids:  https://goo.gl/4zgPp5 and to put it in a nutshell, they had to evaluate information regarding President Hoover and formulate an historically based argument to support or refute Hoover's inclusion in the Top 10 Worst President's List.

The first thing they did (and I did this on purpose) was a very short video about the Bonus Army and decide if they were Hoover's adviser, should they pay the veteran's at that point or wait until the predetermined date.  Going , most of the kids believed he belonged on the top 10 worst president list, but then these were the conversations I heard over the past two days:

1. "I have so much more evidence to get him off the list than keep him on.  Crazy! I would never have guessed that two days ago."

2. "There is no way you should be blaming Hoover for the Stock Market Crash.  All of the things that led up to the Stock Market Crash happened before he took office.  Wait... that the same as how a lot of people blame Obama for the Great Recession?  You can't blame him for the crash, but he clearly didn't make the situation better.  Obama made the situation better.  Look at the difference in the unemployment numbers for the 4 years of Hoover and the one I found for Obama." (Notice that he took the initiative to look up unemployment numbers for the first four years of the Obama Administration).

3. "I don't really know much about several of these Presidents.  Does he really deserve to be on a list with those Presidents?"

4. "I think that what is really swaying me right now is that he sent food to the troops in Europe.  I can't believe that they wouldn't feed the soldiers enough, that is just common sense! But I guess, that was really thinking outside the box back then.  Imagine how different the war would have been if he hadn't done that?"

This is only a very small snippet of what they were talking about and it is only day two.  I can tell you 100% that these were not discussions or questions or thoughts that were happening in my class when I was driving the learning up in front of the class.

In keeping with the end in mind, here is what we are doing next.  https://goo.gl/LNEUT6 The work that they are doing this week and next will become the documents from which they write their DBQ on the last page of the above link.  I would love to hear your thoughts on both Inquiry Based Design and the two tasks I have included.

The new semester started last week and with it brought a new group of #DigCit students.  One of the first things we do is learn about digital footprint/tattoo (check out Commonsensemedia.org) and then Google ourselves.  Before we do that, I ask the students to predict in their blog what they think they will find and how other people would view them based on their online profile.  After they spend time Googling themselves, their , their social media accounts and Google Images, some of them had an eye opening experience.  Below are a few of the .  We are learning how our Blogs can be a vehicle through which student voice is heard.  If you have a minute, please read a couple and comment.  Thank you!